The measurement of plant temperatures for the assessment of water suction has the following background: During transpiration, plants evaporate water via the stomata. Evaporation is the transition from liquid to gaseous phase, below the boiling point at which hydrogen bonds are broken. The energy required for this process is taken from the environment in the form of heat. This causes the leaf surface to cool down.

While leaf surfaces of plants that are sufficiently supplied with water and therefore transpire fully are cooler than the temperature of the ambient air, stressed plants with limited water supply do not have a clear cooling effect or are even warmer than the ambient air. In addition to the water supply, climatic factors also influence the level of transpiration, in particular the vapour pressure deficit of the air, i.e. the capacity of the air to absorb water. This is usually higher in dry periods and with more or less unrestricted solar radiation than in cloudy weather conditions or after a rainy period.

For an irrigation control, which should orient itself at the actual water-demand of the plants, the information of the leaf-temperature alone is therefore not sufficient. There are various solutions to this problem. In the project, the current evapotranspiration of the plant population is derived because it can be used directly to calculate the required watering.

In the irrigation control model IRRIGAMA Steering, which was further developed in the project from the model BEREST 90 and is used for irrigation control on the practical trial shots, the determination of irrigation times and amounts from the consideration of different parameters takes place. Among other things, the current evapotranspiration is calculated from meteorological factors, the calculated soil water supply and stored plant stand information such as type of fruit or stage of development. However, it is not measured and verified in the stand. In IRRIGAMA Steering a possibility has been created in the course of the project to integrate external information on the AET in order to calibrate the model. The approach in the project is therefore to use infrared thermography to determine the actually prevailing AET on the basis of the leaf temperatures and to include it as a correction factor in IRRIGAMA Steering.

Leaf temperatures as a stress indicator can be measured selectively with leaf thermometers. Thermal imaging cameras (infrared cameras), which cover the range of the electromagnetic wavelength spectrum from approx. 8 to 14 µm, are suitable for a flat image, such as is useful for irrigation control on arable land.

With the help of a UAV (octocopter), photographs of the plant populations are therefore produced in the project along flight routes on the field trial fields with a thermal imaging camera and a camera that only records the red and near-infrared part of the light spectrum.

A considerable part of the raster cells or pixels in the images of the thermal imaging camera are mixed pixels due to the relatively low resolution. They contain a certain, unknown proportion of plants and a further proportion that is not one of the plants to be observed, for example soil or accompanying vegetation. For irrigation control, however, only the information of the cultivated plants is of interest.

The two temperature orthomosaics are central input variables in the TSEB energy balance model, with which the current evapotranspiration of a concrete surface can be calculated. The temperature-based Two-Source-Energy-Ballace-Model divides the energy fluxes and the evapotranspiration over a plant population into a plant-based and a soil-borne part and allows to estimate the evaporation of the soil and the transpiration of the plants separately. The approach was developed by Norman & Kustas et. al (1995).

In the project first calculations could be carried out with the existing and already evaluated UAV data. The calculation of the AET on the Schöllnitz field test on 09.07.2018 has a resolution of 5 m per grid cell. The AET of the maize stand fluctuated between about 0 and 7 mm.

However, the further processing of the data from the two cameras is very time-consuming, so that results for the integration of the temperature-based AET in IRRIGAMA steering are not expected until 2019.

The economic evaluation of a site-specific irrigation system is another important project task. The cost-benefit analysis of irrigation worthiness is based, among other things, on the recording of yields in sub-area-specific, uniform and non-irrigated areas and the corresponding full and partial cost accounting. The effects on water and energy consumption compared to conventional irrigation are also determined in order to estimate the environmental performance of the new method. Initial results have been obtained, but at least one further irrigation season must be waited for in order to be able to make reliable statements. Finally, recommendations for action on sub-area-specific irrigation and irrigation control for agricultural enterprises in Brandenburg and comparable regions will be developed. 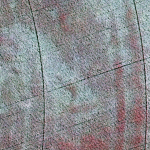 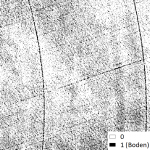 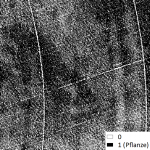 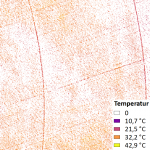 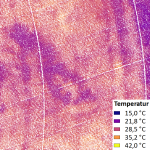 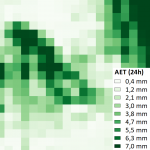 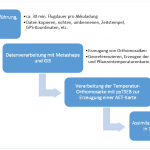 In order to model the water demand of agricultural crops, it is necessary to consider future relevant events, both potential evapotranspiration and precipitation. These events are generated by metoerological models with unavoidable inaccuracies. Therefore, there is often a deviation between forecast values and actual events. Therefore, the project also examined which forecast errors are to be expected.

The evaluation showed that the modelled/forecast values of precipitation over a period of 6 days in advance predict the events that then occur with surprisingly high accuracy. The observation period here is February to December 2017.

The following statements have to be made 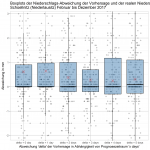 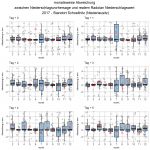 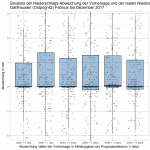 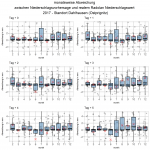 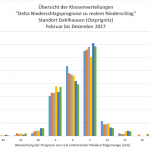 The evaluation showed that the modelled/predicted values of PET show comparatively high variation over a period of 6 days in advance. This is partly due to seasonal variability and partly to the complexity of determining the AMBAV value. The observation period here is February to December 2017.

The following statements have to be made 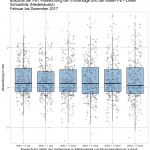 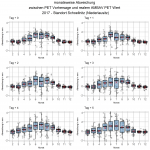 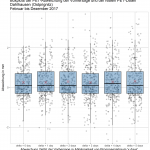 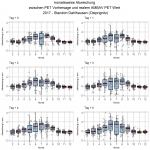 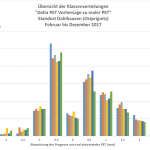 What does dryness actually mean?

But what does this actually mean? Is there a uniform definition?

What dryness means depends on the context you are looking at. A meteorological dryness can exist but also a dryness of the soil can be considered.

aridity of the soil

Soil dryness may mean that the soil has a lower usable field capacity than a certain threshold value over a longer period of time. For example, this threshold can be 50%. Drought stress symptoms are generally to be expected for plants here. However, the considered depth of the soil is also important. Soil dryness is therefore also dependent on which plant species are considered. An average number of days during which this occurred can be determined over a previous period of time. If the number is now lower in the current period, one can already speak of a drought.

Drought of the weather (meteorological drought)

Here you can try to look at the deviations from long-term mean values of a series, e.g. a 30-year series. The time frame to be considered is relevant. Therefore dry years, seasons but of course also months or whole decades can occur. The latter usually causes drought catastrophes.

When does it start to be dry?

This question can only be answered statistically and justified.

According to DIN 4049, a dry year exists when the annual precipitation of a year is less than the arithmetic mean of a time series minus the standard deviation.

The DWD, especially the Agrarmeteorolgie, considers a dry period, for example a year, as dry, with which a quantity of precipitation falls, which is smaller than the 20% percentile of a reference series. This is statistically less than the DIN 4049 definition, because the standard deviation is the 33 1/3% percentile of a normally distributed series.

Due to the statistical distribution of precipitation, which usually has no statistical normal distribution, the situation occurs that both values are similar and differ by only a few mm. This is also the case if the median, i.e. the 50% percentile, is used to determine dryness thresholds according to DIN 4049.

This website uses cookies to improve your experience while you navigate through the website. Out of these, the cookies that are categorized as necessary are stored on your browser as they are essential for the working of basic functionalities of the website. We also use third-party cookies that help us analyze and understand how you use this website. These cookies will be stored in your browser only with your consent. You also have the option to opt-out of these cookies. But opting out of some of these cookies may affect your browsing experience.
Necessary immer aktiv
Necessary cookies are absolutely essential for the website to function properly. This category only includes cookies that ensures basic functionalities and security features of the website. These cookies do not store any personal information.
Non-necessary
Any cookies that may not be particularly necessary for the website to function and is used specifically to collect user personal data via analytics, ads, other embedded contents are termed as non-necessary cookies. It is mandatory to procure user consent prior to running these cookies on your website.
SPEICHERN & AKZEPTIEREN